AOSense, Inc. was featured in the news by SPIE, the international society for optics and photonics, in April 2022: SPIE: Photonics in the early days of quantum age. AOSense was highlighted as a small company that created the first generation of quantum technology and capable of making novel products in quantum gravimetry (see Gravity Measurement). Working closely with NASA’s Goddard Space Flight Center, AOSense has developed quantum sensors and will continue to develop quantum sensors for precise navigation. Also, AOSense was mention as a marketplace company under “Applications and systems” on the QED-C website: QED-C Marketplace: AOSense, Inc. in the recently and rapidly expanding field of quantum sensing and technology. 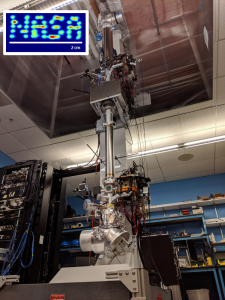 The image above is a prototype sensor that is capable of obtaining highly sensitive and accurate gravity measurements. The measurement utilizes a technique called atom interferometry – an measurement process that exploits the wave character of atoms to measure acceleration. Atoms are sensitive to gravitational signals and can be treated as behaving as light waves. Lasers can be used to split and manipulate atoms wave to be re-directed into different paths. The atom waves will interact with gravity in a way that impacts the interference pattern generated once the atom waves recombine. Scientists and engineers can analyze the pattern to obtain an accurate measurement of gravity.

With this new type of technology, the changes in Earth’s gravity can be measured. For example, the changes from melting ice, droughts, and underground water supplies. This type of instrument can be sent to space to study the interior structure of the other planets, moons, and even asteroids or can measure gravitational waves generated from black holes.